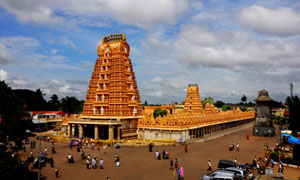 Nanjangud lies on the banks of the river Kapila (Kabini), 23 km from the city of Mysore. Nanjangud is famous for Srikanteshwara Temple. Nanjangud is also called 'Dakshina Kashi'.

Nanjangud has been a major Shaiva centre for nearly a thousand years. Chola Kings in the 11th – 12th century are considered to have set in motion the construction of the temple with significant additions by the Hoysalas and the Vijayanagara kings. This temple was later renovated by the Hoysala kings. Both Hyder Ali and Tipu Sultan had close associations with this temple. The Wodeyar kings of Mysore made various grants to renovate the temple.

The town is famous because of the huge temple dedicated to Lord Nanjundeswara also referred to as Srikanteswara. The temple was originally built by the Ganga rulers in the 9th century during their occupation of this region. The residing deity of the temple was later called Hakim Nanjunda; as given by the Tippu Sultan as it is said a favorite elephant of his was cured after prayer was offered to the deity. The Vaidya Nanjundeswara, even today is said to be a healer for his believers, and one can see even today worshippers doing Urulu seve, a ritualistic practice after taking bath in the Kapila river. Twice every year thousands of worshippers gather for the famous Chariot Festival locally known as the Dodda Jathre and the Chikka Jathre. Idols of Lord Srikanteshwara, Goddess Parvathi, Lord Ganapathi, Lord Subramanya and Lord Chandikeshwara are kept in five separate chariots and a traditional puja is performed to the idols early in the morning on the Jathre day. After the puja, chariots are flagged off. Thousands of devotees pull the Chariots carved out of wood, across the streets of the old town.