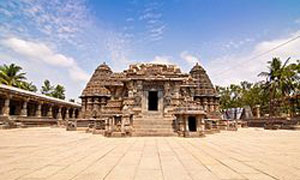 Somnathpur is well known for the breathtaking Prasanna Chennakeshava Temple, one of the three famous & finest representations of Hoysala architecture (other two being temples at Belur & Halebid). This is one of the three Hoysala temples nominated for UNESCO World Heritage Site status.

Located on the banks of Cauvery River, this temple was built in 1268 by Somnatha, a general of King Narasimha III. The temple stands on a raised platform like other Hoysala temples. The temple comprises three shrines and three wonderfully carved peaks with a common Mandapa. The three sanctums once housed beautifully carved idols of Keshava, Janardhana and Venugopala. Today, the idol of Lord Kesava is missing but the other two are still worshipped by the visitors.

The temple is famous for its elaborate and intricate sculptures. The temple is enclosed in a walled courtyard with a mandapa running along the wall. The temple is built on an elevated star shaped platform. At the temple, the outer walls of the main temple are decorated with a series of star-shaped folds and the entire surface is covered with carved stone plaques. The walls above the plinth are also carved with exquisite figures of gods and goddesses taken from the Hindu puranas and arranged in vertical panels.