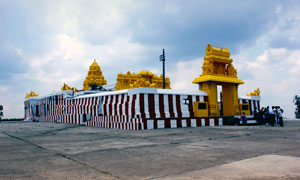 Himad Gopalswamy betta is a hill in the Chamarajanagar district of the state of Karnataka, at a height of 1450m India and is extensively wooded. It is also the highest peak in the Bandipur National Park.

This temple was built by the Hoysala King Ballala during AD 1315. Later the Wodeyars Wodeyar dynasty of Mysore who were ardent devotees of Lord Venugopala displayed keen interest in maintaining the hill temple.

This temple lies in the core area of the Bandipur National Park and is frequented by wild life including elephants. Dense fog predominates and covers the hills round the year and thus gets the prefix Himavad. The temple contains dhwajastambha (flag-pillar) and a bali-peetam inside the mukha mantapa (inner-porch).The parapet wall of the faade of the mukha mantapa contains the sculpture of dashavatara with the centre portion of the sculpture depicting Krishnavatara. There is a shikhara tower over the garbha griha. The garbha griha contains an idol of Krishna holding a flute under a tree. Krishna is flanked by his friends and the posture is that of a dance with the left big toe resting on the right one. The panel also features several characters and icons from Krishna's avatar Opening Times 8 30am till 4pm Transport It is approximately 75 km from Mysore on the Mysore Ooty road. Private vehicles are not allowed beyond the forest check post. One has to make use of the mini bus arranged by forest department to visit the temple.Entry Fee No Entre fee.