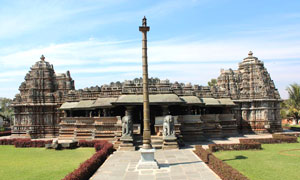 Halebidu (which used to be called Dorasamudra or Dwarasamudra) was the regal capital of the Hoysala Empire in the 12th century. It is home to some of the best examples of Hoysala architecture.

The temple complex comprises two Hindu temples, the Hoysaleswara and Kedareswara temples and two Jain basadi. In front of these temples there is a large lake. The two Nandi images on the sides of the Hoysaleswara temple are monoliths. Soapstone (chloritic schist) was used for the construction of these temples. There is an archeological museum in the temple complex.The Hoysaleswara temple, dating back to the 1121 C.E., is astounding for its wealth of sculptural details. The walls of the temple are covered with an endless variety of depictions from Hindu mythology, animals, birds and shilabalikas or dancing figures. No two sculptures of the temple are the same. This temple, guarded by a Nandi bull, was never completed, despite 86 years of labor. Opening Time- 6 30 AM 9 00 PM Transport Halebidu is 16 km away from the one more historical place Belur. It is well connected by road and rail to Bengaluru, Mysuru and Mangaluru. There are regular buses to Hassan. The distance is 149 km to Mysore and 31 km to Hassan. No Entry fee.