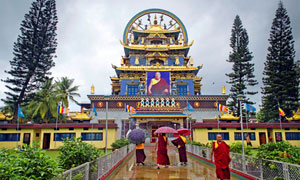 A cultural delight among all the other tourist places in Coorg, The second biggest Tibetan settlement in India, the main attraction in Bylakuppe is the Golden Temple/Namdroling Monastery.

The Golden Temple/Namdroling Monastery adheres to the typical Tibetan style of architecture, the town is mainly inhabited by Tibetans who, according to a demographic survey carried out today, an estimated 70,000 Tibetans live in the settlements; these were established on land leased by the state government to accommodate some of the Tibetan expatriates who came to resettle in India after 1959. Bylakuppe consists of a number of agricultural settlements, colonies are close to each other, and has number of monasteries and temples in all the major Tibetan Buddhist traditions.

The town is especially great to visit during the festival of Losar (Tibetan New Year), which is celebrated with much fervor which comes in the month of february or march based on lunar calendar, but not a penny waste if visiting during off festive season too. Timings: 07:00-20:00(Alldays) No entry fee.