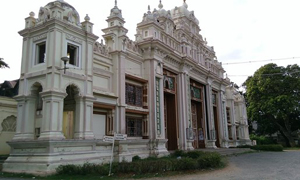 Jaganmohan Palace is one of the seven palaces of the royal city of Mysore and one of the most beautiful contributions of the Wodeyar Kings of the city during their regime.

The Jaganmohan Palace was constructed in 1861 by the king, His Highness Krishnaraja Wodeyar III as an alternate retreat for the royal family.

The palace is built in traditional Hindu style and has three stories. In 1900, an external facade with a hall behind it was added to the palace. This facade has three entrances and the entablature has religious motifs and miniature temples crafted on it.[5] The walls of the interiors are painted with murals. These mural paintings which follow the traditional style of the Mysore school of painting depict the Dasara scene and the canvas depicting the sequence of the Jumboo Savari stretches across three walls.[6] This mural is the earliest known picture of the Mysore Dasara and has been painted using vegetable dyes. Timings - 10 AM to 5 30 PM. Entry Fee: Adults - Rs 20 and Childrens(5 to10)- Rs 10.