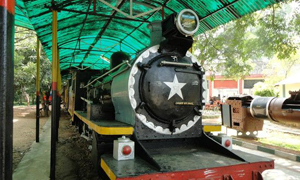 The Maharaja of Mysore contributed with his royal carriages enriching the treasure of the Railway Museum in Mysore. Main highlight of this museum is Sri Ranga Pavilion, two royal coaches that belonged to the Maharaja of Mysore. The museum has the `Maharani's saloon' carriage that has a kitchen, dining car unit and royal toilet dating back to 1899 and an Austin rail motor car, a 1920-built `E class engine'. One of the main features of the Mysore Railway Museums’ the Chamundi Gallery where a number of black and white photographs and paintings have been displayed depicting the growth of railways in India. Steam engines including the first steam engine and signaling accessories from the beginning of the railways in India are interesting in their own right. A steam water pump of 1934 and a hand-operated crane of 1885 are also displayed. The museum has a battery-operated mini-train giving a short ride for children on the grounds. Timings: 10.00 am - 01.00 pm, 03.00 pm - 05.00 pm Except on Mondays. Entry Fee Rs.15/- per person. How to Reach Railway Museum - Railway Museum is opposite to the entrance of CFTRI on KRS Road. It’s around 3 Kms. from city center. Mysore City Buses ply through Railway Museum.