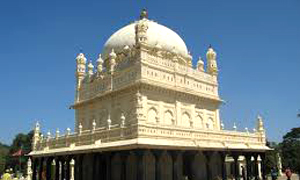 Srirangapatna is a town in Mandya district of the Indian state of Karnataka. Located near the city of Mysore, it is of religious, cultural and historic importance.

The town takes its name from the celebrated Ranganathaswamy temple which dominates the town, making Srirangapatna one of the most important Vaishnavite centers of pilgrimage in south India. The temple was built by the Ganga dynasty rulers of the area in the 9th century; the structure was strengthened and improved upon architecturally some three centuries later. Thus, the temple is a medley of the Hoysala and Vijayanagar styles of temple architecture.

Srirangapatna was the scene of the last and decisive battle fought between Tipu Sultan and a combined force of 50,000 men provided equally by the Nizam of Hyderabad and the East India Company under the overall command of General George Harris. This battle was the last engagement of the Fourth Anglo-Mysore War. The Battle of Srirangapatna, 1799, was truly momentous in its historic effects. At the battle's climax, Tipu Sultan was killed within the fort of Srirangapatna, betrayed by one of his own confidants; the spot where he ultimately fell is marked by a memorial. For the last time in history, Srirangapatna had been the scene of political change in the Sultanate of Mysore. The joint forces of the victorious army proceeded to plunder Seringapatam and ransack Tipu's palace. Apart from the usual gold and cash, innumerable valuables and objets d'art, not excepting even the personal effects of Tipoo Sultan, his rich clothes and shoes, sword and firearms, were shipped to England. Places to visit in Srirangapatna - Sri Ranganathaswamy Temple, Dariya Daulat Palace, Nimishambha Temple, Balmuri Falls, Sangam and Dodda Ghosai Ghat