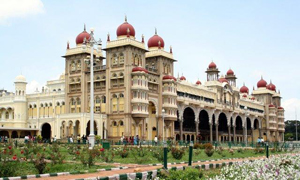 The Palace of Mysore is a historical palace in the city of Mysore in Karnataka, southern India. Mysuru is commonly described as the City of Palaces. There are about seven palaces inclusive of this; however, Mysore Palace refers specifically to this one within the Old Fort. Mysore Palace is now one of the most famous tourist attractions in India, after the Taj Mahal, and has more than 6 million visitors annually.

Built by the Maharaja Rajarshi His Highness Krishnarajendra Wadiyar IV. It is the official residence and seat of the Wodeyars the rulers of Mysore, the royal family of Mysore, who ruled the princely state from 1399 to 1950.

Mysore Palace has houses two durbar halls (ceremonial meeting halls of the royal court) and incorporates a mesmerizing and gigantic array of courtyards, gardens, and buildings.Also do not miss the palace light illumination on Sundays and all public holidays between 19 and 19:45.Sound and light programs are arranged on all days between 7 and 7:45, except on Sundays and public holidays.The palace is ten minutes from the city central railway station and from the suburb bus-stand; right behind city bus-stand, and twenty minutes (less four miles) from Mysore Airport. Entry to the palace buildings is between 10 Am to 5:30 Pm. Children below seven are free to enter the palace, while those between seven and twelve are charged rupees 25 per head. For adults, tickets are available for Rs. 40. Price of admission for foreign tourists is INR 200.