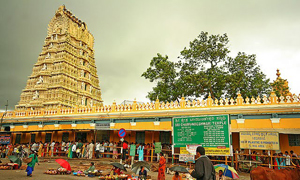 A temple of great antiquity with over 1,000 years of background, it was a small shrine initiallyand assuming importance over the centuries it became a big temple as seen today.

Chamundi Hill is about 13 kms from Mysore, Atop of the hill the famous Sri Chamundeswari Temple. ‘Chamundi’ or ‘Durga’ is the fierce form of ‘Shakti’. She is the slayer of demons, ‘Chanda’ and ‘Munda’ and also ‘Mahishasura’, the buffalow-headed monster.

The idol of the Goddess is decorated every day and worshipped by a number of priests. She is the tutelary deity of the Mysore Maharajas and the presiding deity of Mysore. For several centuries they have held the Goddess, Chamundeswari, in great reverence.The temple is of a quadrangular structure. Built in Dravidian style, it consists of the Main Doorway, Entrance, Navaranga Hall, Antharala Mantapa, Sanctum Sanctorum, and Prakara. There is a beautiful seven-tier Gopura or pyramidal tower at the entrance and a ‘Vimana’ (small tower) atop the sanctum sanctorum. Atop the ‘Shikara’, the tower at the entrance, are seven golden ‘Kalashas. Besides the Chamundeswari temple, one can see Mahabaladri, Narayanaswamy temples and Mahishasura and Nandi statues, there are a few other interesting spots on the Chamundi Hills. Among them the Lalith Palace is one. It belongs to the Mysore royal family. The Maharajas were making a short stay in this Palace whenever they visited the hills. Built on the hill-top, it offers an attractive bird’s eye view of Mysore city and far off places. Lalithadri Palace was built during the reign of Krishnaraja Wodeyar IV..