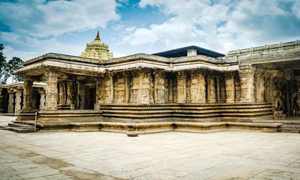 Talakad or Talakadu is a desert-like town on the left bank of the Kaveri river 45 km (28 miles) from Mysore.

The origin of the town is lost in antiquity; but one tradition is that its name was derived from two Kirata twin brothers, Tala and Kadu, who, cutting down a tree which they saw wild elephants worshiping, discovered that it contained an image of shiva, and that the elephants were rishis transformed. The tree being miraculously restored, all obtained moksha and the place was named Tala-kadu, which was translated into Sanskrit as Dala-vana. Two stone images declared to represent the brothers are pointed out in front of the temple Veerabadra swamy. In a later age, Rama is said to have halted here on his expedition to Lanka.

Among the temples of Talakad, the Pathaleshwara, Maruleshwara, Arkeshwara, Vaidyanatheshwara and Mallikarjuna temples, the five Lingams believed to represent the five faces of Shiva, form the Pancha pathi and have become famous. In honour of these five Shiva temples, a fair is held once every 12 years called Panchalinga Darshana, last held in 2009. The Panchalinga Darshana is held on a new moon day in the month of Karthika when two stars conjoin. On this day, tradition has it that pilgrims should first bathe in the Gokarna theertham, worship Gokarneswara and Chandikadevi, and then worship Vaidyeshwara, and then bathe in the northern eastern southern and western stretches of the Kaveri and then worship Arkeshwara, Pataleshwara, Maraleshwara and Mallikarjuna, returning to Vaidyeshwara after each worship, finally worship Kirtinarayana and conclude the pilgrimage in one day.Opening Times - 6.00 a. m. to 8.00 pm Mysore 50 km there are frequent buses to this place.